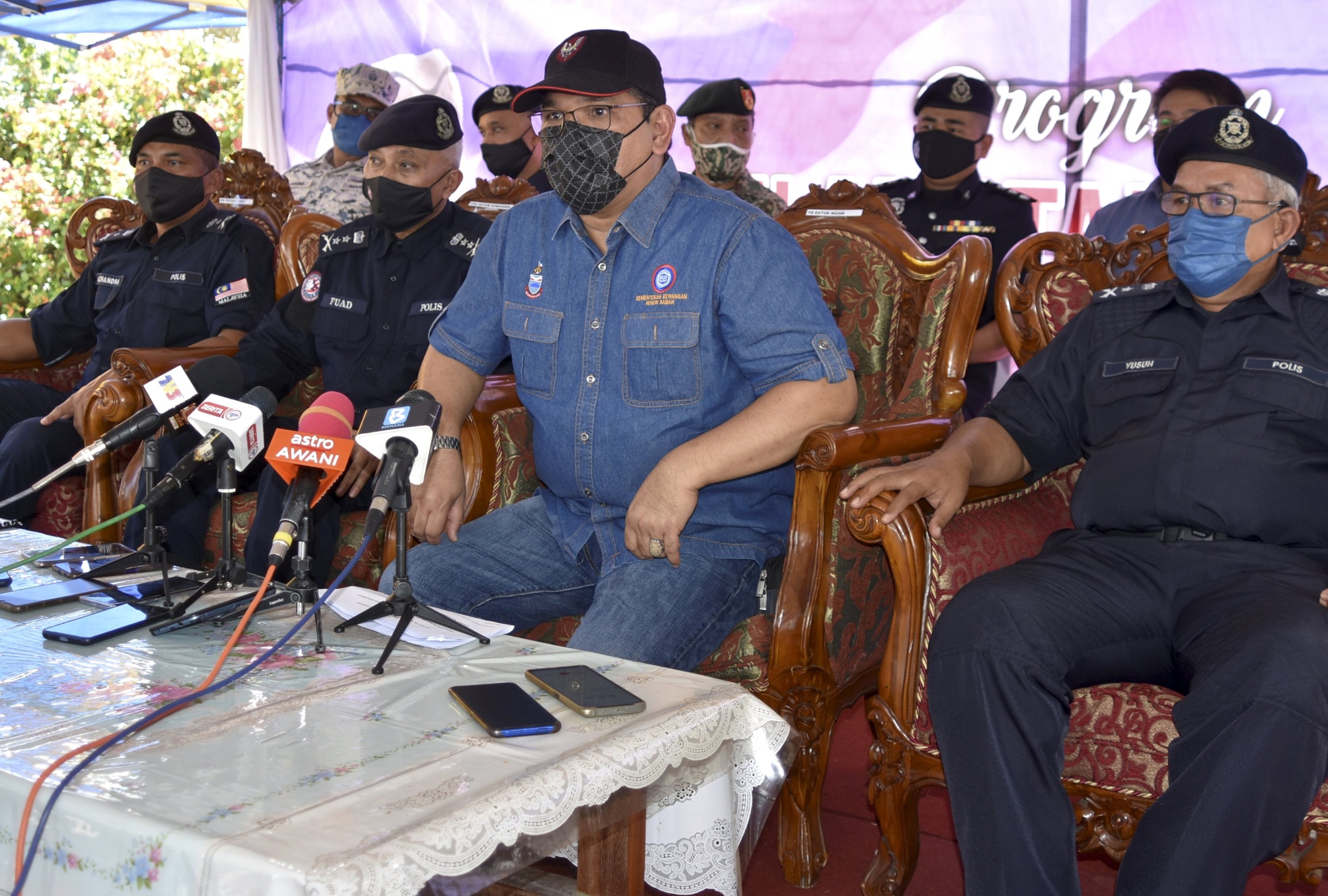 Nizam (second right) at the press conference after attending a community safety and voluntary patrol programme organised by ESSCom.-Bernama photo

TAWAU(Oct 14): Community policing played by villagers along the Eastern Sabah Security Zone (ESSZone) has helped the security forces in tackling the issue of cross-border crime.

Eastern Sabah Security Command (ESSCom) commander, Datuk Ahmad Fuad Othman said that in Tawau, for example, 14 of the 34 coastal villages were found to be the hotspots for the smuggling of illegal immigrants, controlled items and drugs.

He said three of the 14 villages were Kampung Membalua, Kampung Batu Payung and Kampung Tinagat where the villagers’ active involvement in community policing had managed to reduce the crime rates there.

“When the Community Safety Unit and Voluntary Patrol Scheme were activated in these three villages, the anti-crime effort has seen much success as this year alone, the villagers detained 32 individuals including illegal immigrants, ‘tekong darat’ (ground coordinators) for smuggling activities, and drug traffickers.”

He said this at a community safety and voluntary patrol programme organised by ESSCom and officiated by Sabah Assistant Finance Minister, Datuk Nizam Abu Bakar Titingan.

At the programme held in collaboration with the Department of National Unity and Integration (JPNIN) and the Crime Prevention and Community Safety Department (JPJKK), 43 residents who are members of the Community Safety Unit and Voluntary Patrol Scheme received certificates of appreciation from Ahmad Fuad.

He said the three villages were the best examples in Sabah as their role had helped the security forces boost the ‘Op Benteng’ enforcement operations.

“Based on ESSCom’s intelligence work, we’ve found that the villagers’ active involvement in the community safety effort and voluntary patrols had reduced the entry of illegals into Sabah as well as smuggling activities while the boats dared not land at these villages,” he added.

Meanwhile, he hoped that JPNIN and JPJKK could provide financial or logistical support to facilitate the crime-prevention effort of the community safety and voluntary patrol scheme team members.

“These are residents who use their own vehicles and pay for the petrol in conducting patrols.

“ESSCom will also look into their other needs including using amateur radios point to point as certain areas have no phone network,” he said.

He added that the setting up of the voluntary unit should be extended to other coastal villages in the ESSZone to assist the security forces in crime prevention. – Bernama