Tuesday, July 5
You are at:Home»Sports»Football»Abd Karim: Onus on SSC to boost football development in Sarawak 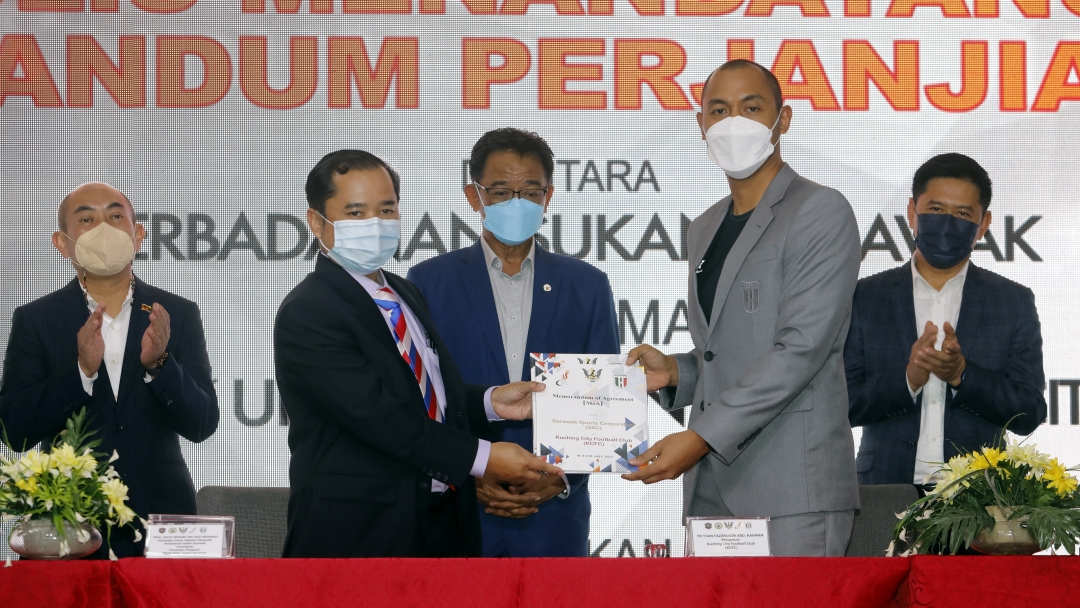 Abdul Karim (centre) witnesses the exchange of MoA documents between Semawi (front, left) and Fazzrudin. The minister is flanked by Rentap (left) and Ripin. — Photo by Chimon Upon

Specifically, when it comes to the development of football in Sarawak, the corporation must work on churning out as many footballers as possible to bring the sport to greater heights, he pointed out.

“It’s a long process, (it) might take years, for young footballers to excel, or to make the champion team. We need planning to groom our football athletes; we need to engage them in various leagues and games to gain experience,” he said prior to witnessing the signing of memoranda of agreement (MoA) between the SSC and two local football clubs, at a hotel here today.

The SSC was represented by its acting chief executive officer Semawi Muhamad for the MoA, while Sarawak United FC and Kuching City FC were represented by their respective chairmen Mohamad Saif Zubaidi and Fazzrudin Abdul Rahman, who is also Tupong assemblyman.

On a separate subject, Abdul Karim said the state government had approved the construction of 17 mini sport complexes throughout Sarawak so as to better facilitate youth and sports development.

“These mini sport complexes – some (have) completed, some in the process of being constructed, and others (are in) the planning stage – in various districts, will enable our youths to have access to the facilities to train in sports, be it football and other activities.”

Abdul Karim also said a centre of high performance would be built, and it would function as a platform to train athletes and develop a healthy mindset so that they ‘could think like champions’.

“The athletes can see themselves as champions, and have the belief that they can deliver.

“They need to have the belief that they are the best. If they kept on thinking that they’re second best, they would never be the best.

“They must believe that they could excel as athletes,” he added.

Meanwhile in a remark made earlier, Semawi said the SSC would propose to review the training allowance for athletes, who had been getting RM30 per day – roughly amounting to RM900 a month.

“We want to see an improvement of the morale of our athletes so as to retain the sport talents in Sarawak, so that the state could emerge champion in Sukma (Malaysia Games) in the near future,” he said.

On the MoA, Semawi said it would focus on providing both football clubs facilities such as the football turf at Stadium Sarawak for the training of their players.

He said also under the agreement, the corporation would be providing food allowance to footballers taking part in the President’s Cup and Youth Cup tournaments this year.

“The SSC will provide food and accommodation allowances, and also airport transfers for footballers and the coaches during away games.

“Apart from that, transport and accommodation will be provided to footballers from outside Kuching,” he said, adding that for footballers competing in this year’s President’s Cup and Youth Cup championships, their health assessment costs would also be covered.

Respective Assistant Ministers I and II for Youth, Sport and Entrepreneur Development, Dato Gerald Rentap Jabu and Ripin Lamat, were also present to witness the signing.