Friday, September 30
You are at:Home»Columns»Perspective»The path of champions 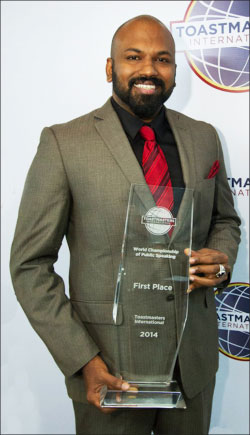 AS opinion columnists we write on something that is current. Unfortunately the current issues these days are rather depressing: murders and wars in the distance, bigotry and racism at home, mudslinging and fault-finding among the people who run or aspire to run our country — this list of bad karma just goes on ad nauseam. So this week I am going to talk about something totally different. You can say that I am burying my head in the sand. So be it.

His speech was entitled “I see something in you …” The audience was wowed and, more importantly, so were the judges. We were at the finals of the Toastmasters World Championship of Public Speaking. His name is Dananjaya Hettiarachchi and he hails from Sri Lanka. As expected after the event, he was mobbed by the crowd who all wanted to have their photos taken with him. They wanted to bask in the light of a champion and savour the triumphant glow.

Yes, we all want to be like the champion. Looking at him on the podium, we wish we could be the ones standing up there. That’s okay. As many motivational speakers say, “Don’t be afraid to dream” and many even recommend that we all should have a hero, someone to emulate. However, the problem is that we only look and admire the champion when he is at his moment of triumph. We dream that we could be like him receiving the trophy and savouring the moment of glory.

However, have we ever considered emulating him in his moment of despair when he failed, or the forlornness of being the only one on the road while he trained for his race, or the loneliness of doing the thousands of laps in the pool before breakfast?

My niece has achieved a measure of success as a synchronised swimmer. She has been involved in swimming since she was a little girl and began serious training when she was barely 10 years old. Every morning her mum had to take her to the training pool. For 10 years the dedicated lady never once got out of bed later than the ungodly hour of five o’clock in the morning.

“Do you want to be a champion like Jessie?” I asked the cousins. “No way!” was the spontaneous reply. The parents too chorused in agreement.

We were so impressed by Dananjaya that we immediately invited him to be our main speaker at a conference we are organising next year. Frankly speaking, we did not know him from Adam, never heard of him speaking until at that championship. I was wondering what we should ask him to speak on but I know that a person who has the dedication to hone his oratorical skills to such a sublime level is certainly worth listening to.

Then I saw his posting on his Facebook account – his litany of failures at public speaking championships before that fateful in July 2014. So here it is:

“A small reflection of my competitive speaking career at finals level. Below is the year of the speech, speech title and result:

2014 – I see something in you – Won the world championship in public speaking.”

Wow! Seven years of hammering at the door until it was opened. Though I don’t think it was the case of the

door being opened for him, rather he booted it down to gain access.

When I saw the posting, I was sure we had made the right choice. Dananjaya also quoted John D Rockefeller who said, “I do not think there is any other quality so essential to success of any kind as the quality of perseverance. It overcomes almost everything, even nature.”

As for having a hero, yes, by all means do have a hero, someone we can look up to and emulate but let us not focus just on the end — the moment of the fruition of a dream. Rather we must be prepared to walk the path, the sometime lonely, the sometime painful but ultimately the joyful path of a true champion.

“Don’t be afraid to dream” is the popular motivational cliche. Henry David Thoreau (1817-1862), author and poet, injected a dose of realism when he said: “If you have built castles in the air, your work need not be lost; that is where they should be. Now put the foundation under them.”

Someone gave me this

advice which I think is worth sharing. He calls it “self audit

l Make a list of skills that you need to achieve your goal.

l Assess which of the skills you already have.

l Make room in your life to acquire the skills that you don’t have but need.

l Now go to it and stick at it.

It is the path that all champions have to take.

Comments can reach the writer via dunstandesee@theborneopost.com.