Saturday, January 23
You are at:Home»News»Nation»Mukhriz resigns as Kedah Menteri Besar 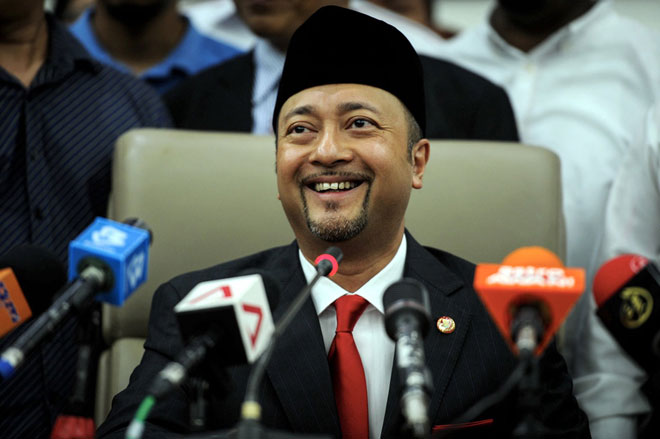 At a press conference at Wisma Darul Aman here, Mukhriz said he was informed yesterday that he had lost majority support in the Kedah Legislative Assembly.

“I was informed that I had lost majority support in the Kedah Legislative Assembly following a secret ballot by all Barisan Nasional and opposition members of the assembly before the members of the Kedah Council of Regency,” he said.

“My priority is to ensure the well-being of the people of Kedah.

To prevent the political crisis from dragging on at the expense of the state administration and the people, I have made the decision to resign as the menteri besar of Kedah with immediate effect,” he said.

Mukhriz also announced his resignation as the president of the Kedah Football Association (KFA) and as the chairman of government-linked companies because these positions came with the post of menteri besar.

Mukhriz also announced that he would resign as the president of the Kedah Football Association because that position came with the post of menteri besar.

As for his position as chairman of the Kedah UMNO Liaison Committee, he said he left that to be determined by Prime Minister and UMNO President Datuk Seri Najib Tun Razak.

Mukhriz said he would remain in UMNO to serve the people despite holding no position.

“I also pledge my continued service to all the people of Kedah Darul Aman,” he said.

Mukhriz, who was sworn in as the 11th menteri besar of Kedah on May 6, 2013, said he had discharged his responsibilities with honesty and integrity.

“I have never tarnished the sovereignty of the Kedah Sultanate and the dignity of the people by any action that did not reflect the qualities of a leader.

“I regard the opportunity to have served the people of Kedah under the Sultan of Kedah as a great honour.

I hold in the highest regard the advice, guidance and support given me by the Chairman and Members of the Kedah Council of Regency,” he said.

He also thanked the State Executive Council and the state administration for their support.

At the press conference, Mukhriz, 52, said he was offered a post of deputy minister but decided not to take it up.

Mukhriz said he had not informed his father, former Prime Minister Tun Dr Mahathir Mohamad, that he wanted to resign as the menteri besar.

“I did not inform him.

I hope he supports (my decision).

I feel like a very heavy burden has been lifted from my shoulders,” he said of the resignation.