Sunday, May 22
You are at:Home»News»Sabah»SUCCC gathers feedback on barter trade ban 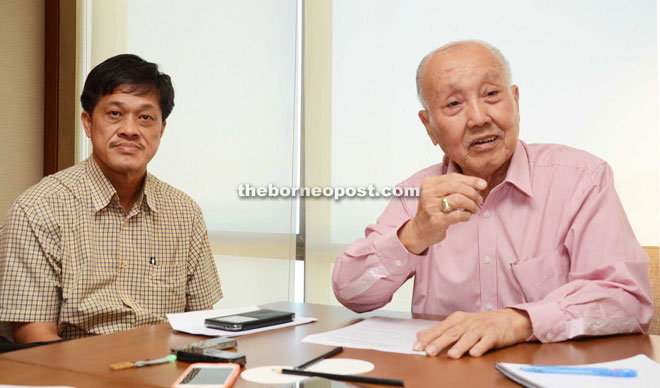 Gan (right) and Wong speak on the suspension of cross-border trade at the press conference.

KOTA KINABALU: The Sabah United Chinese Chambers of Commerce (SUCCC) has established a cross-border trade subcommittee to collect and study feedback pertaining to impact on the government’s decision to halt barter trade, with the aim to seek a win-win solution for the government, security forces and business community.

While SUCCC’s stance is to support the government in carrying out security measures, Gan said the suspension on barter trade would lead to great losses for businesses.

“SUCCC always works with and supports the government in its security measures, but at the same time, we cannot neglect our economy,” he said at a press conference yesterday, adding that the cross-border trade subcommittee was formed during the association’s management committee and supervisory committee meeting on Tuesday.

The cross-border trade subcommittee is chaired by Associated Chinese Chambers of Commerce and Industry of Malaysia (ACCCIM) deputy chairman of logistics and transport committee, Wong Thart Sin, who has over 20 years of experience in cross-border trade activities.

Gan hoped that the halt on barter trade would be a short-term measure as the subcommittee searches for win-win solutions for all quarters.

“We have entrusted the committee to study, discuss and come up with measures which will be mutually beneficial to our security and business community to propose to the government.”

On another note, Gan expressed his gratitude towards the government, Home Ministry, Eastern Sabah Security Command (ESSCom) and the Royal Malaysian Police (PDRM) for beefing up manpower and assets in the east coast in the past six months.

He pointed out that the Abu Sayyaf abductions that occurred recently happened at international waters, and not within Sabah waters or the mainland.

“The kidnapped victims are not tourists, but businessmen mostly in the cross-border trade.

“Regrettably, some reports by West Malaysian media gave the impression that these abductions happened in Semporna.”

He said such reports had affected domestic tourist arrivals to the east coast.

However, Gan said tourist arrivals from China remained unaffected as all the hotels in Semporna were still fully booked.

“I have talked to a young China woman who said she was not afraid (of going to Semporna).

“So overall, we are doing okay in tourism.”

He said businesses in Kudat, Sandakan and Tawau were mainly involved in barter trade with their counterparts in the Philippines while Tawau with the Philippines and Indonesia.

Wong added that more than 90 per cent of small and medium enterprises (SMEs) in the barter trade business were bumiputeras while those in entry port trade were mostly Chinese.

As a start, Wong said the subcommittee would request businesses in Sandakan, Lahad Datu, Kudat and Tawau to provide barter trade information, include trade volume.

Previous ArticleMasing: Only BN knows how to develop country, state
Next Article Former MP Anek to stand in Opar