Wednesday, February 1
You are at:Home»News»Sarawak»Call for heritage buildings to be re-purposed
For the freshest news, join The Borneo Post's Telegram Channel and The Borneo Post on Newswav. 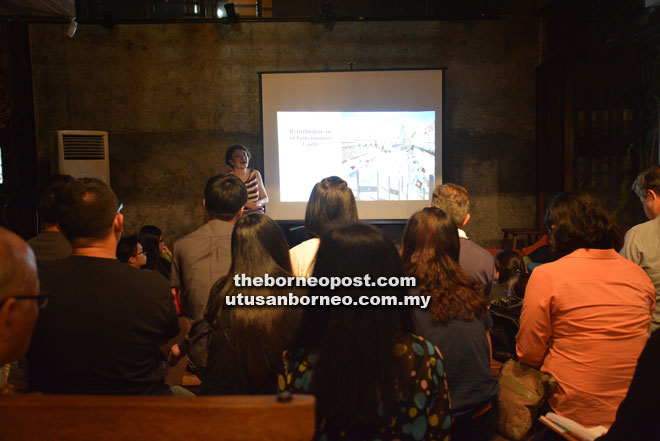 Chinchilla presents the public lecture on heritage conservation through architecture.

KUCHING: The Sarawak Heritage Society has called for the re-purposing of heritage buildings here into community spaces.

In a press statement issued on Tuesday in conjunction with a public lecture under its ‘Heritage Speaker Series’, the society said Sarawak is currently facing heritage conservation challenges.

“Kuching has many heritage buildings, which no longer serve their original function, but rather than being demolished they can be innovatively repurposed into community spaces,” said the society.

The society suggested among the potential projects would be the restoration and adaptive reuse of the old Brooke Dockyard facilities.

On the public lecture, ‘Leading with the Transformation on Cultural Identity: The Case of the Refurbishment of Garcimunoz Castle’ by international award-winning architect Dr Izaskun Chinchilla, the society said the adaptive reuse of a medieval castle could be a useful update of innovative ways by which cultural heritage can be conserved and how they may be applied to Sarawak.

Garcimunoz Castle in Spain was first the site of a 10th-century Moorish citadel, before becoming the residence of the prominent Villena family in the 12th century and, from 1708, the site of a church that is still in use today.

Chinchilla shared on how this innovative refurbishment consolidates and reinforces ruins from Arab, Medieval and Neoclassical times, adding contemporary architectural value to the building’s heritage, while transforming the castle into sustainable and safe spaces for the public to visit.

The refurbishment also integrates digital media and new meeting venues in order to engage the local population socially and facilitate renewed cultural and economic activities in a deprived rural area.

The project aimed to show how innovative architectural design can refurbish heritage sites imaginatively, while also strengthening local economies, enabling public access for all, and supporting their socially and environmentally sustainable use for the long term.

Chinchilla is an honorary fellow of the Royal Institute of British Architects.

In addition to being principal partner at Izaskun Chinchilla Architects, she is also senior teaching fellow, senior research associate, and public engagement fellow at the Bartlett School of Architecture, University College of London.

Previous ArticleConcerted effort in conducting fire, chlorine leak drill
Next Article WeChat Pay one of the ways for Sarawakians to do business with China