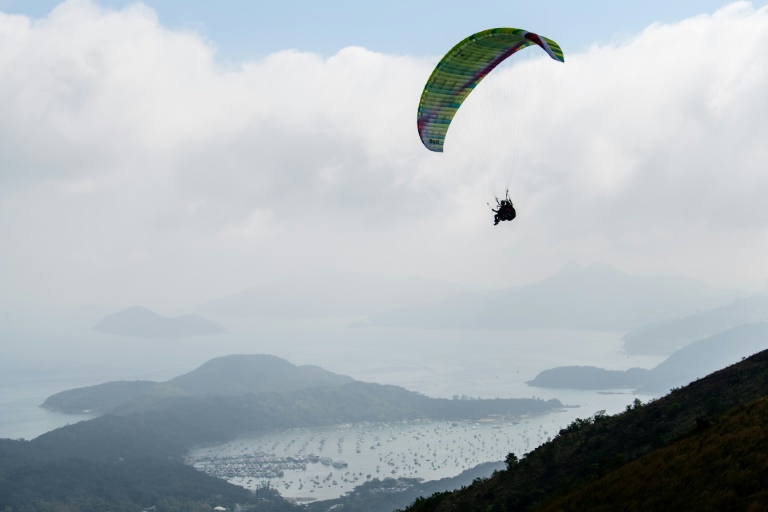 Paragliding is one of a number of outdoor sports that offer release from the stress of Hong Kong’s concrete jungle below. – AFP photo

On a mountain slope overlooking Hong Kong, Giovanni Lam waits for the right gust of wind to send him soaring skywards, one of a growing number of paragliders using flight to escape the dense urban sprawl below.

Patience is rewarded in paragliding, explained Lam, a university lecturer and youth counsellor who brought three novices and heavy equipment on a 40-minute mountain trail hike last month, with the group waiting two hours in the winter chill for the weather to turn.

Once the clouds dispersed, revealing a rolling tapestry of parkland below, Lam ordered his tandem protege Keith Yung to walk against the wind as he pulled on lines attached to the canopy behind them.

Within seconds, the glider caught the breeze and the duo took off.

“Hong Kong is very crowded and there are always many people wherever you go… but once you are off in the sky, you are free,” Lam told AFP.

“It feels like there are no chains or constraints.”

With most young Hong Kongers priced out of the city’s eye-watering property market — often living with parents in cramped flats well into their thirties — paragliding is one of a number of outdoor sports that offer release from the stress of the concrete jungle below.

Lam hopes the sport will help his students gain a different perspective on the city they live in.

With his feet firmly back on solid ground, 22-year-old first-timer Yung was exhilarated.

“The view is very different from what we see on the ground, or even from hiking up a peak,” he beamed.

While Hong Kong is renowned for its skyscrapers and dense housing blocks, the steep mountains that crown the southern Chinese city tower over any man-made structure, gifting it a wealth of hiking trails and outdoor opportunities.

Paragliding has steadily caught on, Lam said, from just a few dozen pilots a few years ago to some 200 active members today.

Lam, 44, first tried it in Bali and has leaped off mountainsides across Asia.

But his favourite destination is still Hong Kong. He rates it “five-stars” for difficulty with fast-changing tropical weather and small landing zones, making it both a challenging and unforgiving place.

The sport is not without its dangers.

In July, experienced Hong Kong paraglider Patrick Chung Yuk-Wa — a friend of Lam’s — failed to come back from a flight during squally conditions as a typhoon neared the region.

With grim weather conditions setting in after he was reported missing, it took rescuers five days to locate and retrieve Chung’s body.

The sport also debuted the following month at the Asian Games where an Afghan athlete suffered a spinal injury and a Chinese competitor broke a leg in separate crash landings.

Hong Kong has eight approved flying areas for paragliding. But pilots fear the sport’s growth might be limited by pressure to build on parkland in a city with a major housing shortage.

Two landing zones within the designated flying areas have recently become unusable because of urban development.

“We can’t fly without landing. It’s a pity that Hong Kong attaches a lot of weight to development, especially property development,” Lam said.

“It’s important that we treasure what we have now.” – AFP