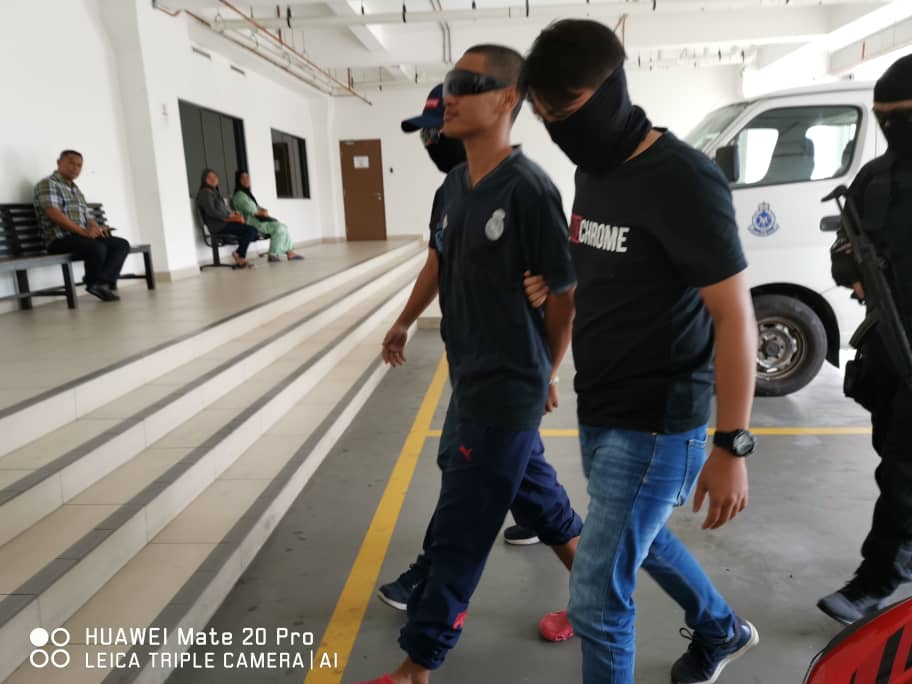 Alif being led away by personnel from the Special Branch Counter-Terrorism Division (E8).

KOTA KINABALU: A 21-year-old Indonesian man who was allegedly involved in a terrorist group was sentenced to four months’ jail plus a stroke of the cane for illegal entry.

He was arrested for the offence at the central lockup here at 10am on May 27.

Based on the facts of the case, the accused, who also has an Indonesian name of Yoga Fabrianto, was initially apprehended by police at a house at Kampung Keritan Laut, Keningau at 1.15pm on May 26 before he was taken to the central lockup.

In mitigation, Muhammad Alif, who was not represented, said he stayed in the state  for eight months and worked at an oil palm plantation.

Deputy public prosecutor Nureen Natasha Mohd Raffie, urged for an adequate sentence to be imposed against the accused.

According to a source, Mohd Alif was apprehended due to his alleged involvement in terrorism activity and planned to go to Syria for jihad.

Meanwhile in the same court, 15 foreigners were jailed four months each for a similar offence of entering the state illegally.

The judge imposed the sentence on the accused persons aged between 19 and 45, after they pleaded guilty to separate charges under Section 6(1)(c) of the Immigration Act 1959/63.

They were apprehended for failing to produce their valid travel documents during separate operations in Papar, Beaufort, Ranau, and here between April 18 and June 28.

In mitigation, the accused persons who were lined up according to their names, stood facing the judge and prayed for leniency and requested to be sent back to their country as soon as possible.

The judge also ordered eight of the men to be whipped once and all of the accused to be referred to the Immigration Department for their biometrics data to be taken before being deported back to their country.

Prosecuting officer Inspector Lim Swee Beng prosecuted. All of the accused persons were not represented.