Wednesday, December 7
You are at:Home»Columns»Between The Lines»YES Prime Minister to ‘Keluarga Malaysia’, but … 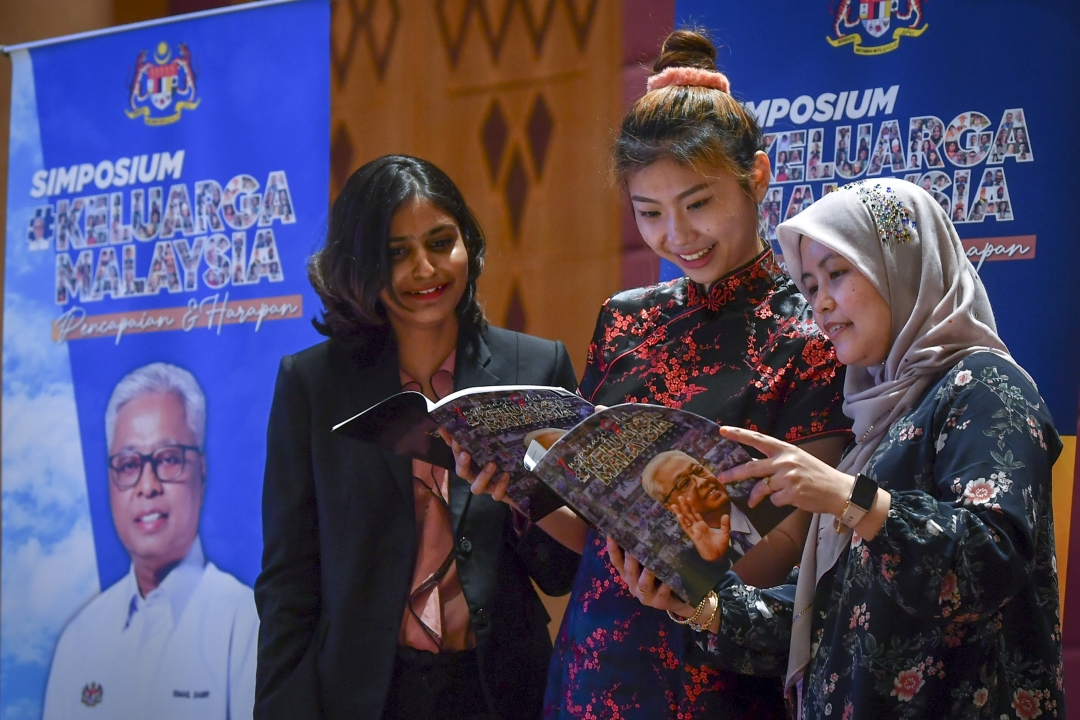 Some of the participants of the ‘Keluarga Malaysia Symposium’ browsing through the ‘Inspirasi Setahun #Keluarga Malaysia Teguh Bersama’ booklets during the event held in Putrajaya last month. — Bernama photo

INCLUSIVITY, which is an integral component of the ‘Keluarga Malaysia’ concept, is a broad practice or policy that ensures equal access to opportunities and resources for people who might otherwise be excluded or marginalised.

The Prime Minister speaks of inclusivity as a core characteristic of ‘Keluarga Malaysia,’ even if many in society’s higher echelons choose not to engage in the discourse, which is perceived as bordering on sensitivity.

It appears that avoiding it like an ostrich with its head in the sand is a fashionable option.

That does not address the issue, let alone contribute to the national agenda of ‘Keluarga Malaysia’.

But Prime Minister, the concept of ‘common ground’ can easily devolve into a catchphrase unless it is constantly reviewed, examined, and tested in real-life situations. The dynamics of ‘common ground’ facilitate dialogic communication, which leads to trust, tolerance, acceptance and congeniality across the multi-ethnic social landscape.

Yes, Prime Minister, the passage would not be easy in real life, despite appearing to be so theoretically.

Many of the barriers to common ground stem from prejudice and a sense of superiority, resulting in a refusal to accept equality of access to opportunities for all and to share with others.

Ethnic hegemony stands above the rest as an adversary to a plural society.

Hegemonic tendency of varying degrees is prevalent in politics as well as in some other areas of social and economic activity. And the irony is that the harbourers of such tendency speak flawlessly of shared destiny and commonality. However, they remain trapped in their prejudices and social nuances.

They must break free from the bondage of doublespeak to be true proponents of the national agenda. The initiative must start at the top and grow organically in an environment where sincerity of purpose, commitment to common ground, social dexterity, and courage reign supreme.

The expectations are high and the task is daunting, and the long-term move that departs from conventions and traditions may be viewed as detrimental to the nature of party politics in the early stages.

In light of this, it is paradoxical that these same people, who have not graduated from the old-school tradition of top-down approach to managing politics to the ‘Keluarga Malaysia’ pathway, are aware that they cannot remain detached from others who differ in thoughts and views. They also cannot deny the interdependence of various social, cultural, and economic values.

Humans are social organisms that develop and are embedded in patterns of interdependence relations.

For some time now, it appears that the root cause of polarisation, which is impeding the growth of common ground, has escaped the attention of leaders who matter and are looked upon to lead where the social terrain is unfriendly and not easily surmountable by the ordinary citizens.

Leaders at all levels, beginning with the top, must mitigate these social and psychological barriers in order to inflict change on the political and traditional mindsets of many who are still trapped in the wasp of old-style politics, including the behavioural pattern in the social dynamics across the multi-ethnic society; otherwise, efforts to establish a common ground for ‘Keluarga Malaysia’ will be futile.

Yes, Prime Minister, as you have rightly pointed out, ‘tolerance’ is an intrinsic value that must remain imbedded and inherent in the social matrix of the Malaysia family milieu. It is frequently cited as a key goal in educational policy, and it is a quality that we should instil in our children and schools.

But do we really want to promote tolerance as our ultimate goal? What are the limitations of this concept?

Our families and communities print the numerous inner maps we carry to help us navigate the world. However, the statement and proclamation must go beyond rhetoric. In this regard, family and community are two of the most important social institutions in the development and daily lives of individuals.

They shape who we are, instil values in us, define what we consider normal and abnormal, and teach us about what is and is not possible. Although family and community are frequently studied separately, they are inextricably and reciprocally related.

The viability of the family as a social institution has always been dependent on the support of the local community.

Yes, Prime Minister, you were aware of the peculiarities and complexities of the ‘Malaysian Family concept’ and attempting to simplify the message by avoiding the critical issues may complicate your well-intended agenda.

And you’ve wisely decided to rise above it.

Communities, in sociological terms, are the contexts in which families prosper and flourish or flounder and fail. A better understanding of the complex, dynamic relationship between family and community benefits development practitioners, policymakers, and researchers.

To comprehend and appreciate the concept and broader relational values of ‘Keluarga Malaysia,’ one must first situate the story within Malaysia’s plural society, taking into account the dynamics and nuances of various ethnic and cultural groups, as well as the inherent assertiveness of regional identity.

But Prime Minister, there is one word of caution: the social and cultural matrix that makes up Malaysian society in Malaya differs significantly from that in Sarawak and Sabah. For some leaders, this entails a crash course in Malaysian sociology as well as grappling with the realities and dynamics of a multi-ethnic society.

Appropriate parameter for all

It follows if knowledge and understanding are lacking, ‘Keluarga Malaysia’ may end up as a hollow expression disconnected from the reality of a society that is becoming increasingly polarised.  As a result, if the discourse on the concept of ‘the Malaysian Family’ is to gain traction, the often-taken-for-granted notion of a policy-initiated perspective viewed through a single lens with a common template must be reconsidered in order to embrace the most appropriate parameter acceptable to all ethnic groups.

There is no social study on plural society that does not highlight the enormously negative effects of polarisation on the healthy functioning of democracy. Whatever type of polarisation is examined, whether ideological, religious, or ethnic, democracy will suffer in highly polarised societies, though the ways in which it does so may differ.

Malaysia has been plagued by racial, religious and reform polarisation for decades, and it has had a significant impact on its electoral politics. However, what complicates Malaysia’s polarisation is that two additional cleavages — over religion and competing visions for political reform — overlap with and often exacerbate ethnic divides.

Where would that put ‘Keluarga Malaysia’ crusade that seeks to alleviate disunity and set the common ground for Malaysian togetherness? For most part, politicians bear the task to break the yoke.

Political elites regularly appeal to these divides to mobilise their supporters but also make intermittent efforts to downplay one or more of these fissures, with the aim of winning the ‘centre ground’ and securing power. In such times of growing polarisation that may threaten the conceptual foundation of ‘Keluarga Malaysia’, is forging coalitions the most appropriate alternative?

Yes, Prime Minister, you have rightly acknowledged the pivotal role of tolerance in setting in motion the wheel of family values which are as relevant to the family institution as they are to the bigger ‘Keluarga Malaysia’.

In simple English, ‘tolerance’ means ‘inclusion,’ but actually that is not enough. Many people who have been marginalised in the past hear inclusion as ‘come on in, but don’t change anything’. Inclusion implies that ‘you are welcome to join what we do, but we will not change what we do’.

With this ideal in mind, the mission of ‘tolerance’ must extend beyond tolerance to include understanding, valuing, respect, or, even better, solidarity and affirmation.

Finally, change will take place only if those encouraging words are followed by practices that promote self-awareness, dialogue, and actions aimed at developing a caring and critical community based on the principles and tenets of ‘Keluarga Malaysia.’

It is also time for leaders and people in positions of power to pay attention and be courageous enough to put their best foot forward.

The community is watching.