Wednesday, February 1
You are at:Home»Features»What kind of humans are we raising?
For the freshest news, join The Borneo Post's Telegram Channel and The Borneo Post on Newswav. 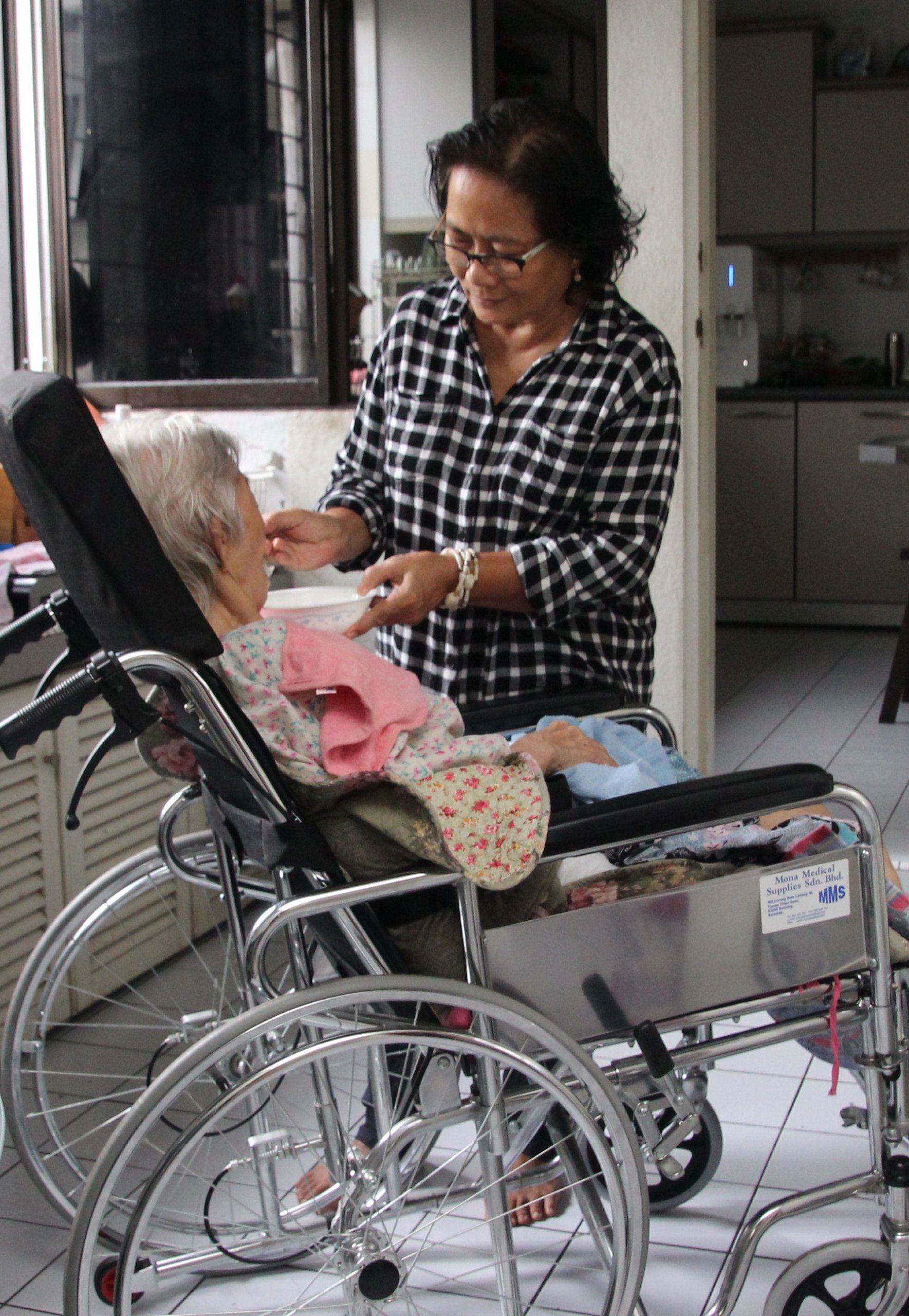 LOVE has turned cold. The affinity and affection have gradually departed from what was once a heart-warming and embracing love of a mother who brought the child into this world.

Years after the child grows to become a parent, she (or he) grows into a person devoid of the core values that their mother once embraced and generally upheld by tradition. The child embraces a completely different kind of approach towards dealing with that motherly care and love.

A friend in her 40s once proudly said to me: “I have told my son beforehand to send me to a nursing home when I get old.”

I thought: “What kind of humans are we raising?”

I would rather that children are taught to respect some of the great virtues in life – among them courage, love, compassion, kindness and respect.

As a family, we need to care for one another and all the more so as human beings. With great virtues instilled in our children, caring for one another becomes their second nature.

Someone said to me we need to uphold this core value (caring) as long as we are humans.

A nursing home should be the last option after all things considered fail to make headway.

It has its place.

It is reasonable to send the frail aged to the care centre if they had no children or carer at home, or if their children had to put food on the table and thus, unable to give them constant care.

“What’s sad is when children take a nursing home as a place for their old parents.

“After leaving them at the care centre, they just wash their hands of their filial responsibilities and go gallivanting away.

“They are ‘busy’ and don’t visit,” remarked Lily Ling, a counsellor who is a key member of Two Tree Lodge Hospice Kuching, a non-governmental organisation providing home-based palliative care.
One primary reason for old parents to be put in nursing homes has been the geographical relocation of their children. For those who have the resources, this is an easy option and easier still when they lack moral values.

I came across a bed-bound elderly man, whose wife had passed away, when visiting a nursing home a few years back. I was told that he was a rich man and although frail, he was mentally alert.

He had said: “Don’t give your children high education. They will go overseas and leave you alone.”

Precious presence of loved one 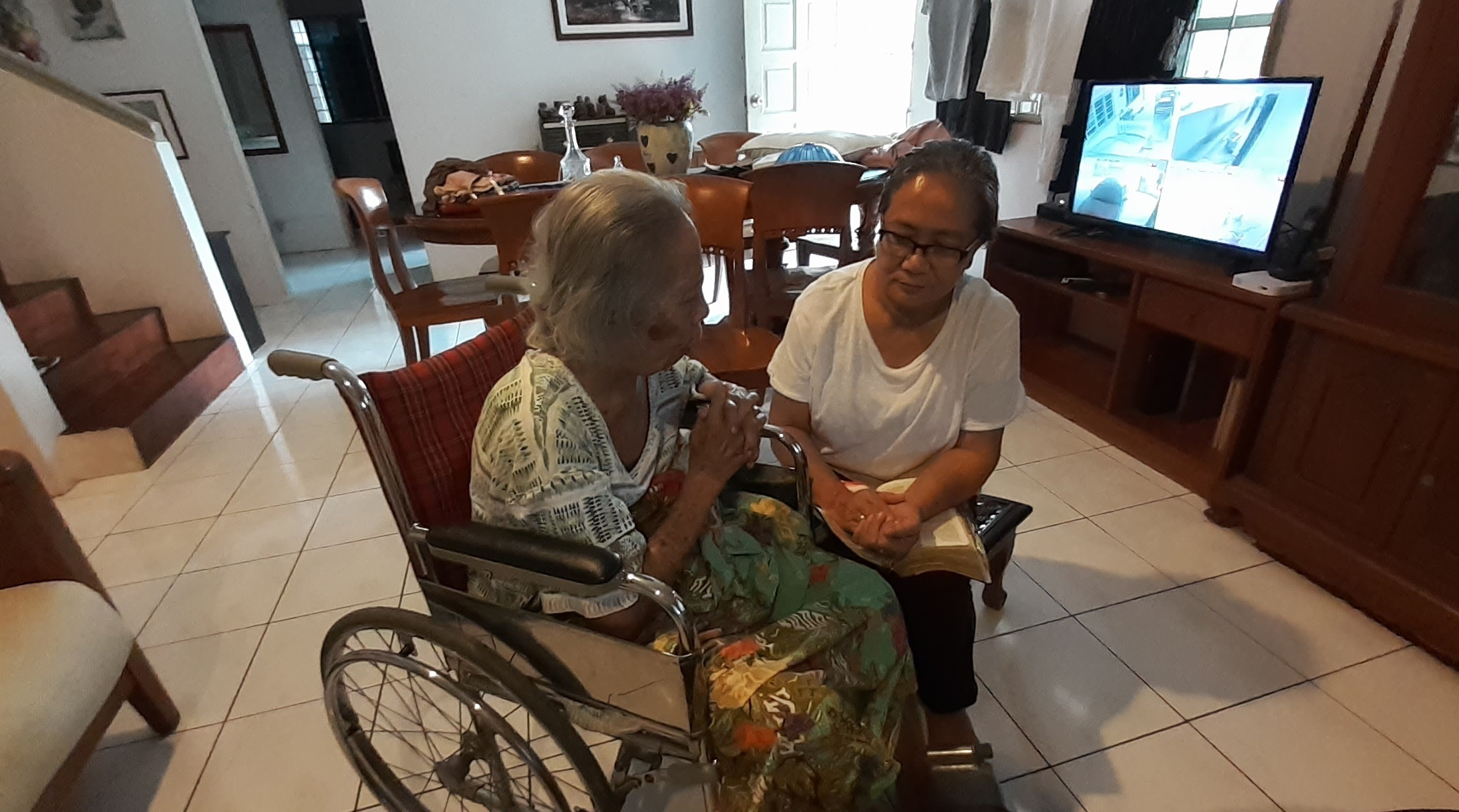 The writer and her mother-in-law before the latter was bedbound.

This brought home to me that all a child could give to their ailing parents in the remaining days of their lives would be filial respect. Riches mean nothing anymore but the presence of their loved ones.

Yet, it is usually the latter that is missing.

A filial child would come home to visit his aged parents even when they have relocated overseas. I have seen how an elderly mother’s face brightened up the moment she saw her son coming. The latter was living in America with his family, but he made it a point to come to Kuching once a year for his mother.

Following his demise a year ago, the wife took the initiative to take that long trip of compassion from US to visit her mother-in-law, who is now bedridden.

The woman is my mother-in-law.

We, my husband and I, persuaded her to live with us some 20 years ago because she had a mild stroke. We felt that she would be better off with us around, instead of her living alone.

My mother-in-law had been with us for five years when we took both my aged parents in to be cared for. My father was stricken with vascular dementia as a result of ‘mini strokes’ and my mother had grown frail.

To cut the long story short, our house resembled a ‘mini hospital’ with all my three frail aged parents living with us, and not to mention, with the ambulance coming and going.

I cannot agree more with Dr Winnie Ling, another key member of Two Tree Lodge Hospice, when she said: “Most of the elderlies in the nursing homes do not want to be there. They want to go home.”

As regards my own parents, all their four children cared for them unconditionally just as they loved and cared for us the moment they brought us into the world.

We worked together to accomplish the main goal, which was to love, cherish and care for our parents – our father who was confused and had lost his sense of direction due to severe vascular dementia; my frail mother who already showed symptoms of early dementia which a few years later developed into advanced stage; and my mother-in-law who after the mild stroke, was slow in her movement but thankfully, healthier.

Driven by my woman instinct, I took upon myself to be the primary caregiver. Women with all their feminine traits are inherently cut for the job.

Not surprisingly, the majority of caregivers of the elderly are women. It is the women who often serve as primary caregivers to their children and older members of their family.

Not many people can fully grasp the pains, the frustrations and the exhaustion of a primary caregiver looking after a highly dependent loved one who requires long term care and yet, never be able to recover unless they have been in their shoes.

All are done in the name of filial love and compassion.

I learn that it is these great moral values that keep me, my siblings and husband going in caring for our parents no matter how difficult the task.

There again, I did not intend to write my story as a caregiver here – I am just compelled to touch on the plight of frail, elderly people, those who have no one to speak for them, those who do not have a voice.

At this point, I find my tears dropping. 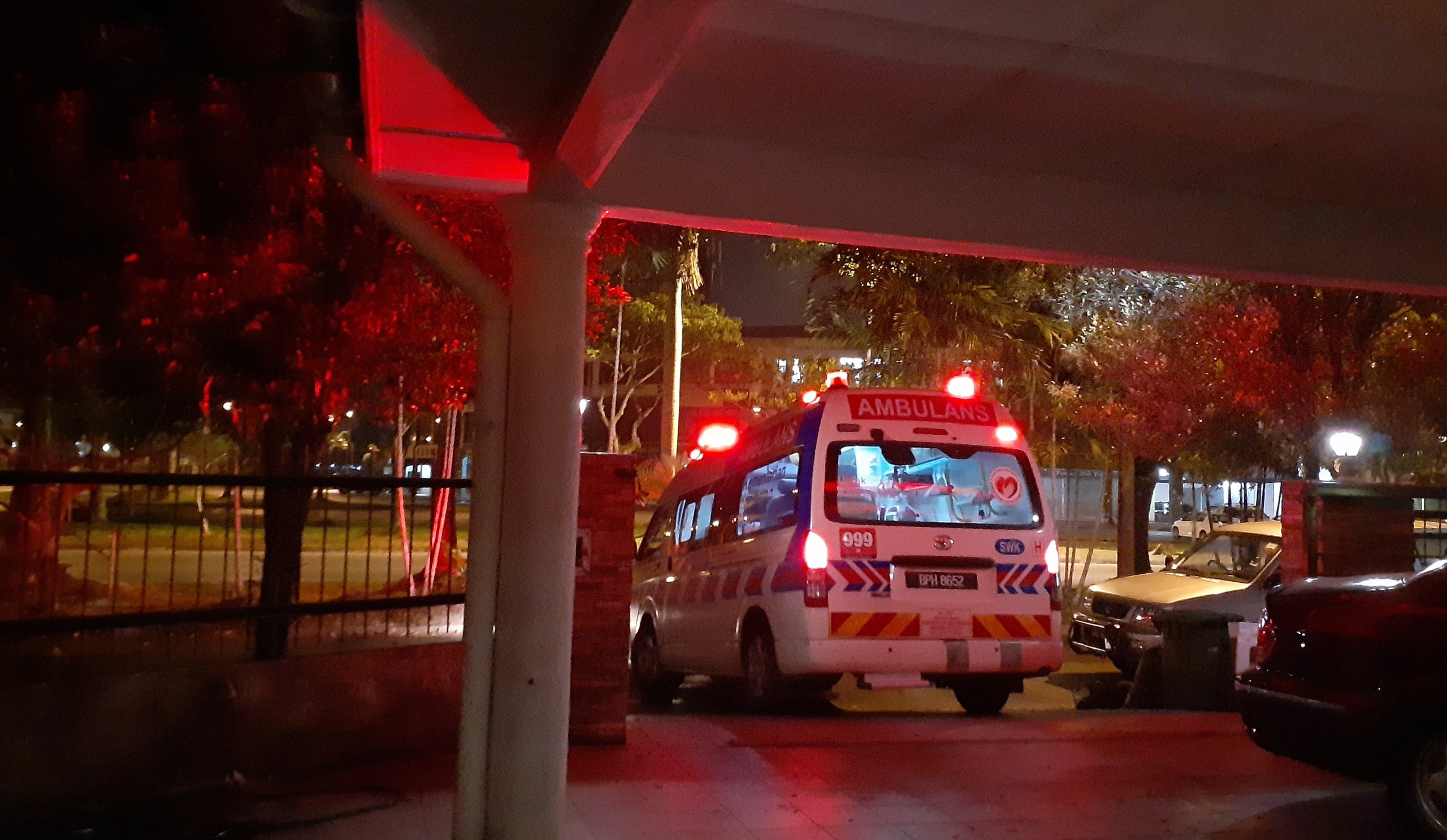 Ambulance, a familiar sight at the writer’s home. With three frail aged parents to care for, the house resembles a hospital.

Whenever I visit a nursing home, I cannot help noticing the sadness in the eyes of the residents. They may have a smile on their faces because of our visits, but their eyes are saying: “I want to go home.”

In the deafening silence, I could hear a silent voice of wanting to go home.

I could hear the cry from the depth of their hearts.

I remember visiting an ex-teacher and her husband who was a retired government officer, a few times at a nursing home with some friends. The amiable couple had a shabby room all to themselves in the rather rundown building.

Although both of them were in their early 90s, they were looking well and had many stories to tell as we took the time to listen.

I could feel the sad aura about them. A question sprang to mind – how did this once highly regarded couple become more like disregarded and trapped in the old nursing home?

It was the voice of pain, loneliness and sorrow, the feeling of being forgotten, unwanted and not loved.

Both husband and wife had deteriorated in health. The latter had been bedridden (the reason for our visit) and by the look of her soaked diapers and worn-out dress, proper care was much to be desired in the nursing home.

As she lay frail on her bed, she had no story to tell. She was just too weak to speak and she could not move her hand to greet us either.

But she knew we were there.

The two seniors died a year apart in the care centre.

In retrospect, parents who are looked after by their children at home will not say ‘never depend on your children’ at the end of their lives.

“Filial piety used to be common sense, but now it is fading away especially amongst the urban folks. Malaysia is a compassionate country. Most companies in the country will release their staff to enable them to care for their loved ones. Usually, they are only required to write a supporting letter,” Dr Winnie explained.

With old age comes the weakening of the human body and related ailments, dementia being a major one, diabetes, infirmity and physical hopelessness to mention a few.

Many children prefer to wash their hands of their filial responsibilities.

These are older children who normally have their own families. 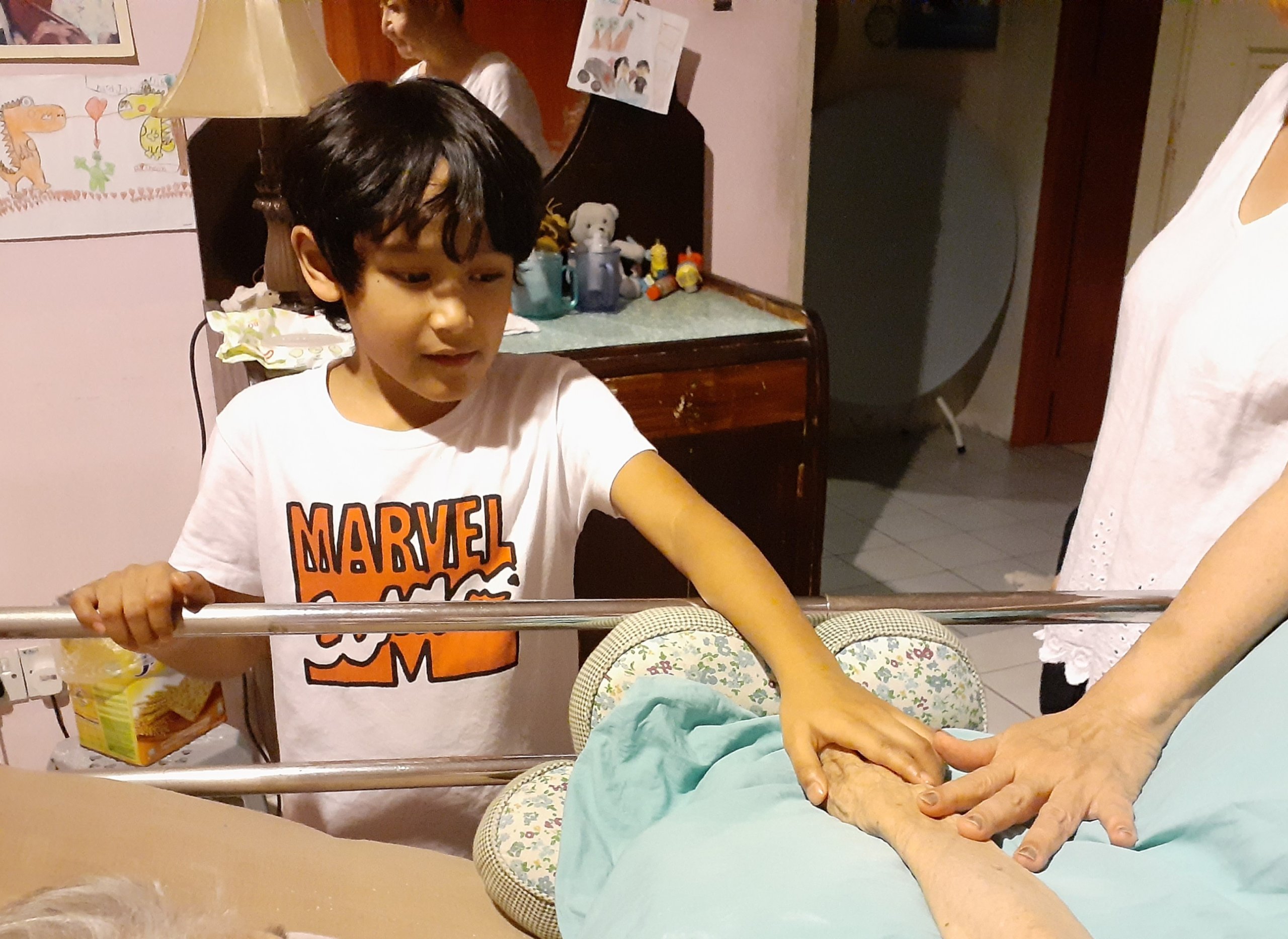 The writer’s grandnephew James emulating his grandma in caring for his bedridden great-grandmother.

To put it kindly, circumstances of modern life have made it difficult to uphold family values.

But no matter what the excuses and reasons for not being there for their parents, the truth is love has grown cold.

Inhumanness is slipping in.

A quote draws my attention: “When I see old age, infirmity, dementia, physical hopelessness, I see my own future. I may or I may not be so afflicted – nobody can tell.”

As a long-term caregiver, I am more aware of the fragility of life. I see infirmity in all its hopelessness.

The saying from the English author John Donne that goes: “No one is self-sufficient; everyone relies on others”, is a good reminder.

No one can escape when old age comes knocking at the door. I always believe that home is our first school where parents teach their children with their lives.

I remember saying to my son how difficult it was to care for the aged in between nursing my mother. He responded by saying: “Well, it’s your mother. Next time when you’re old, it will be our turn to take care of you and dad.”

I knew the moral values I live by have impacted my children’s life. These are things we cannot impart when we do not practise them.

The clock is slowly ticking away for many who are journeying through their sunset years.

Sadly, the once-revered filial piety is also fading away.

The core values of life and humanity are under threat.

The social human landscape that once shaped a traditional culture-based value system of people of virtues and caring relationships is eroding.

The fall of grace and compassion is the fault of man and his community.

Isn’t it time we took stock of the situation and instituted preventative measures – teaching our children great virtues such as love, kindness, honour, courage, compassion, and respect with our lives?

We will all get old. Compassion and kindness from the heart must prevail even when we go out of our way to care for our parents.

It would not be long before we would be in their shoes.